Chuck, the alternately endearing and preposterous quarterlife tale of an underachieving nerd who gets all of the government's secrets planted in his head, wraps up on NBC on Friday, January 27. NBC will be glad to shed the show, now seen by only about 3.3 million households a week. Chuck's owner, Warner Bros. Television, faces an uncertain future as it tries to peddle the show's 91 episodes into the lucrative rerun market.

All this financial gloom for a romantic comedy/spy parody that experts say is still one of the most-talked-about shows on the Internet and a program that critics hail as one of the most intriguing TV concepts in years.

"Have you seen the ratings?" asked NBC president Robert Greenblatt during a press event earlier this month. "That rabid fan base that was going crazy on the net…didn't come to the show. The show is doing a 1 rating. Chuck is over. Let's alert the masses."

Blunt words from an executive about one of his own products—especially since he was the guy who unexpectedly approved Chuck's fifth season just a few months ago. He did it, he said then, because he hoped to rebuild NBC's Friday-night schedule and thought Chuck's small but noisy Internet following would help him bootstrap new programming. 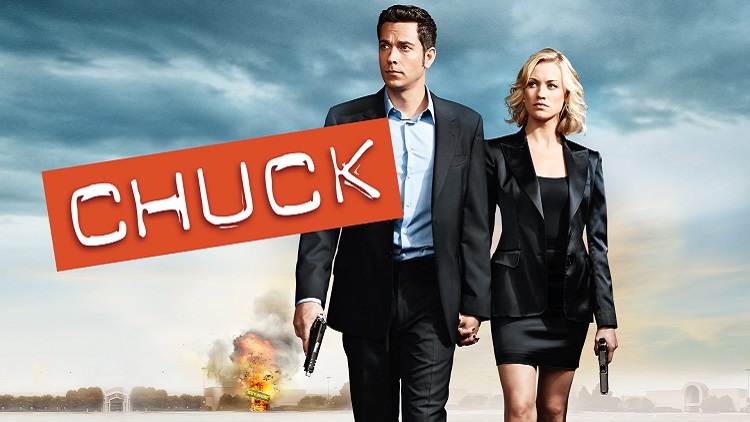 But the hour-long scripted program didn't deliver on Fridays, just as it stumbled for four seasons as NBC's Monday-night anchor. NBC is so keen to banish Chuck that it burned off new episodes during the holidays and it's ganging the last two installments on finale night.

As a ratings grabber, Chuck historically has proven so awful that NBC stopped showing summer reruns several years ago. So why does Warner, which slashed the show's production budget and gave NBC huge discounts on licensing fees for the last three seasons, think Chuck has a future in syndication?

Another Warner show featuring nerds, The Big Bang Theory, which coincidentally premiered on CBS the same night as Chuck in September 2007, is already doing phenomenal syndication business. But Chuck's only sustained non-NBC exposure, a SyFy Channel marathon two years ago, wasn'ta ratings grabber, either. And, this season at least, NBC hasn't even bought the rights to stream the show on its Web site and Warner hasn't distributed Chuck via Hulu.com or sold episodes on iTunes or Amazon. Sales of the first four seasons on DVD and Blu-Ray have been modest.

That's where the critical acclaim and the social media buzz kicks in. If not for the rapturous reviews and impassioned Internet fan base, Chuck surely would have been canceled and forgotten after the abysmal ratings of its 2008-2009 second season. Internet buzz and good reviews, not sound business judgment, have kept Chuck alive and spying for three additional years.

Chuck had a decent financial pedigree when it premiered in 2007. It was co-created by Josh Schwartz, the whiz kid behind The O.C. and Gossip Girl. The pilot was directed by McG of the Charlie's Angels movies. The cast was a felicitous mix of rising stars (Zachary Levi), sci-fi genre icons (Adam Baldwin), and a gifted, if then-unknown, Australian actor named Yvonne Strahovski. And the show's story, if you bought into its peculiar premise, was a hoot.

Chuck Bartowski (played by Levi) was the $11-a-hour leader of the Nerd Herd at Buy More, a barely disguised parody of the white-shirted Geek Squad at Best Buy. In the pilot, Chuck's former college roommate steals all of the government's secrets, sends them to a befuddled Chuck, and is shot by Baldwin's character, a National Security Agency killer named John Casey. Chuck is then hunted by Casey and a mysterious CIA superspy named Sarah Walker (Strahovski).

Hilarity, and real pathos, ensue. Especially in its first two seasons, the show was an intoxicating mix of romance (the absurdly hot CIA spy falls for the sensitive Chuck); retail hijinks (Buy More employees are mostly sociopaths); political nihilism (the show's "big bads" were all tied to government agencies); spy parody (the CIA creates a secret base under the Buy More); and regular-guy moxie (Chuck usually saves the day with commonsense, not spy savvy).

On sites like ChuckTV and Chuck This, fans adored the fact that Chuck didn't want to be a spy. They hissed the bad guys, often played against type by movie heroes like Timothy Dalton, a former James Bond. They cheered Chevy Chase's spot-on turn as a smarmy, Steve Jobs-like computer visionary who was secretly an evil spy. The show's clever gender flip (Chuck was the weak, chatty, and emotional "damsel in distress" while Sarah was the strong, silent, and wary protector) spawned sites like Sarah Walker Fan Girls. Mostly, though, fans doted on the Chuck and Sarah relationship. So-called "Charah shippers" created millions of words of commentary, fan-fiction stories, podcasts, and YouTube videos.

It was good, clean, harmless Internet fun—until the end of the second season, when dreadful Neilsen ratings would have normally meant Chuck's demise. But fans went into overdrive, contacting news outlets, mounting Internet promotional campaigns, and buying Subway sandwiches. Subway, the fast-food chain, was one of the show's advertisers and product-placement partners, and fans wisely deduced that they could make a business statement by purchasing sandwiches and letting Subway know why they were buying.

Whether fan passion and sub sales tipped the balance is unclear. But the show was belatedly renewed for a third season when Subway partly offset the reduced licensing fee that Warner received from NBC. Other products—Toyota minivans, Super Shuttle airport vans, videogames—were eventually integrated into episodes in exchange for what the TV business euphemistically calls "promotional consideration." As recently as last week, Chuck characters were still ostentatiously munching on Subway sandwiches during the action.

But the third season was a huge disappointment. Desperate for a ratings boost, the showrunners recast Chuck in a more traditional TV vein: The lead character no longer poignantly yearned for normalcy, but trained as a "real spy" to "liv[e] a life of adventure." Fan-favorite Sarah fell into the arms of a repulsive super-spy who eventually became the deranged Two-Face to Chuck's Batman. After a brief uptick, however, Chuck's ratings continued to plunge.

Other iterations of the show followed as Schwartz and his co-creator, Chris Fedak, feverishly worked to craft a ratings winner. Chuck and Sarah reunited and then married. Chuck got the government's secrets out of his head—twice. Chuck and Sarah ran away, returned, became the CIA's top spy couple, got fired, and finally started their own private spy agency. The Buy More was bombed in the finale of the third season, but rebuilt at the start of the fourth because it was a convenient vessel for product-placement revenue.

Ratings kept sliding, yet Warner continually slashed its price to keep the show on NBC's weak schedule and to reach a sufficient number of episodes for syndication, where most TV shows finally turn a profit for the producers. All along, Warner and NBC were buoyed—business realists would say blinded—by the show's obsessed Internet fans.

Whether NBC, a distant fourth in the national prime-time ratings, has ever made money on the show is a corporate secret now held by Comcast, the network's new owners. But Chuck was certainly a poor ad vehicle. According to Advertising Age, it only commanded $95,000 for a 30-second spot last season, about half the price paid by advertisers on The Big Bang Theory. Warner probably won't get into the black until and unless Chuck becomes a draw in syndication.

Ironically, however, financial life has imitated the "art" of Chuck.

The big financial winner may be Strahovski, a 29-year-old Australian who originally seemed headed for a modest career as a character actor. Now she's as glamorous as the stiletto-heeled, sports-car-driving Sarah Walker character she portrays. She models for fashion magazines and makes movies with De Niro and Streisand. Her new do was photographed for and orchestrated by Allure, a style magazine. And she'll be featured next month in the Sports Illustrated Swimsuit Edition.

But on Chuck, art also imitates our tough economic life.

Chuck and Sarah's startup spy business is now flat broke. Why? The inexperienced entrepreneurs blew through their seed capital by unwisely purchasing elaborate weapons systems—and outfitting their spy lair with vintage arcade games. "I'm so shocked you people are running out of money," deadpanned one of Chuck and Sarah's clients.

Column and JoeSentMe.com Copyright © 2012-2020 by Joe Brancatelli. All rights reserved.